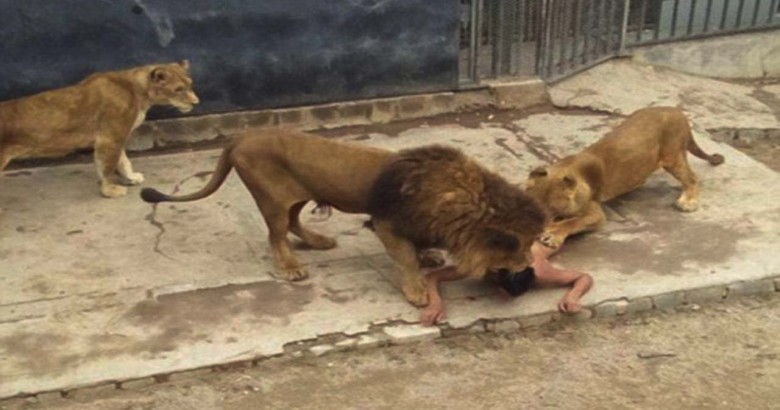 People who climbed the fence at the Zoo – So I have a secret. You know when you go to a zoo and the animals are in cages? Well, for the most part, it is not because the zookeepers are afraid that the animal is going to run away. Well, sometimes I suppose it is, it is not like they stay there on purpose, but for the most part the cages are there to keep the dangerous animals away from you, and to keep you away from them. But every once in a while someone does not get that, and they climb the cage or do something else that ensures that they have contact with the animal.

Even after all the media attention about this over the years, there is still always someone dumb (or crazy) enough to keep on trying it.

Why do they do that? What possible reason would they have? Well, they are idiots. One would think that this would be a situation that people would stop doing, but nope, year after year more people jump in cages with animals and they get messed up.  Some die, some get mauled, and sometimes the animals just throw hands and punk the people out. While it might not seem nice to call these people idiots, there really is not much else to say about it so we’re going to stick with that term.

What follows is a tale of people that messed with animals in a zoo and got messed up to varying degrees. Some were drunk, others were crazy, but all of them were super-dumb. Here they are then: 15 times idiots climbed the fence at the zoo. Sometimes people need a little reminder not to be so stupid. And what says “Hey you just made a really bad decision” quicker than having your arm ripped off by a lion and a tiger as well? I mean, talk about a good wake up call, right? That is if you survive it. Prakash Bezbaruah decided he needed a better angle for his photo so he went to an inner area of the Guwahati Zoo to get some better pictures. When a lion came over he put his arm in its mouth. Instagram that Prakash! Shortly afterward a male tiger appeared and helped the lion rip the guy’s arm off. Talk about teamwork! He died of his injuries. The lion and tiger were not put to death. As we all know, the paparazzi usually has it coming, although this might have been a tad extreme.

15 times the U.S. stabbed its allies in the back (With Pictures)