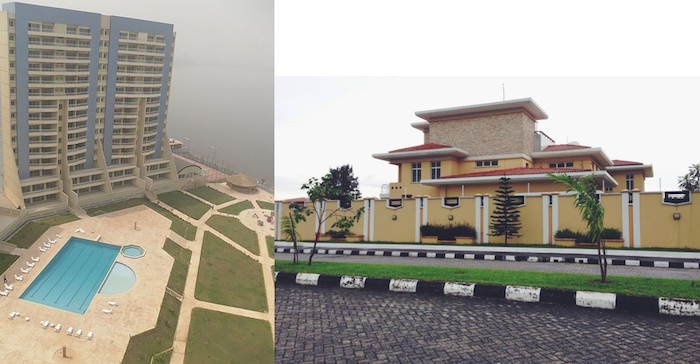 About Banana Island – Banana Island, is an area of Ikoyi, Lagos, Nigeria, 8.6 kilometres east of Tafawa Balewa Square. Part of the Lagos Local Government Area of Eti-Osa in Central Lagos, it is known for its wealthy, multi-cultural community and has some of the most expensive real estate in Nigeria. Banana Island has one of the highest density of millionaires within its boundaries. According to the Elites Magazine, this beautiful island has become the most preferred abode of the rich.

Many years ago, Banana Island distinguished itself as a no go area for the middle class, leaving the rest of Lagos such as Ikeja GRA, Victoria Island and Lekki for the average millionaires in Lagos. A first time visitor to this island is greeted by the sight of well laid lawns with beautiful flowers and well paved roads. The quietude and untainted environment is a major attraction as well.
Beautiful trees are also planted in canopy form to serve as umbrella and to supply fresh air.
Banana Island is an artificial island in Ikoyi, Lagos State. It is located in the Lagos Lagoon and attached to the North-Eastern Ikoyi island by a dedicated road strip which is linked to the existing road network. It was constructed by HiTech, the construction arm of the Chagoury Group and is a joint venture with the Nigerian Federal Ministry of Works and Housing. Prev post1 of 13Next
Use your ← → (arrow) keys to browse
Tags: Banana IslandcountdownlifestylephotosTheOlusanjo
Share13Tweet8Pin3SendShare