Following the bashing by social media over Davido’s gesture towards embattled rapper, Cynthia Morgan, Nigerian singer, Abbey Elias, professionally known as Skiibii Mayana has said Davido’s clout chasing is better than the silence of others who have the means and chose to do nothing. 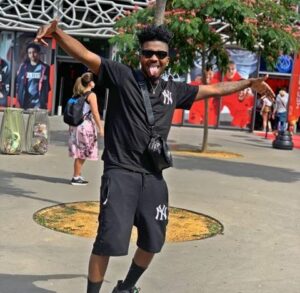 Skiibii made this known on his Instagram stories where he supported Davido and accepted whatever name given to his kind gesture while taking a dig at other celebrities who do not lift a finger during the plight of others. 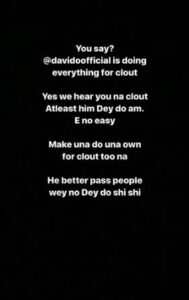 Recall A Twitter influencer identified as Irunnia went on to drag Davido by terming him a clout chaser.

In a series of Tweets, the influencer stressed that the only reason Davido wants to help Cynthia Morgan now is because she is currently the center of attention and he likes being at the center of everything.

Davido is a clout chaser. The only reason he wants to help Cynthia Morgan now is because she is currently the center of attention. He likes being at the center of everything.

When she was suffering and she wasn’t the center of attention why didn’t he help her then?

He isn’t helping because he cares, he just wants to be in the news. And that’s why he always publicize it.

Check most of the time Davido dey fake help with his gumbody. It’s always with people in the news but he always disguise it like he cares. Hypocrisy !!!.