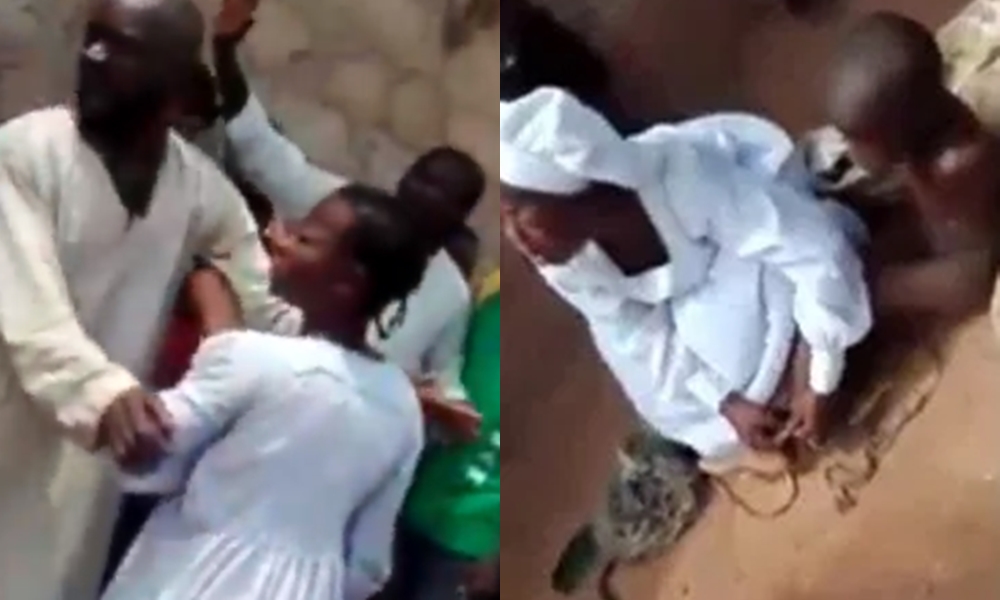 A middle-aged woman, simply identified as Iya Ayo, tied her 10-year-old son in sack for four days over allegation of being possessed with evil spirits.

In the now-viral video which was reportedly recorded in the Fesojaye community, Owode, in Osun State, the woman is seen wearing white garment as she ties the young lad in sacks.

When confronted as to why she did that, she replied that he is possessed by evil spirits and was in the habit of stealing people’s money.

The Chairman, Fesojaye Community Landlords Association, Sakiru Gbadegesin, explained that the mother was in church on Sunday when the boy was rescued. He said;

“We don’t know much about the woman and her family. But on Sunday, around 11am, I was informed that she kept her son in the wardrobe to punish him for his wayward life. I told those who brought the matter to me to report it to the police.

“Later, policemen from the Oke Baale Police Station, Osogbo, came and the woman was forced to open the door and the boy was brought out from the wardrobe. He was almost dead.

“She confessed that she tied the boy in three sacks and kept him in the wardrobe since Thursday, because he was wayward and used to steal.

“A neighbour of the woman, who was fumigating the surroundings of her house, heard the boy’s cry for help and informed us. As of the time, the mother was in church. She attends a Celestial Church of Christ. The woman was later arrested and taken to the Oke Baale Police Station.”

Watch the shocking incident below;