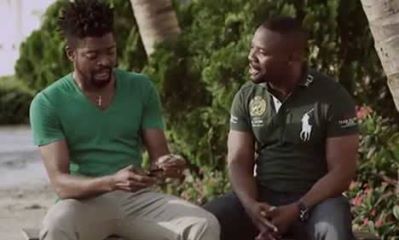 It looks like some individuals are already receiving Christmas gift ahead of December 25th.

Comedian, Basketmouth for the first time opens up on beef…

See also:Rita Edochie sprays money on Odumeje ‘Indaboski’ during her family thanksgiving at his church (Video)

Okey shared a video of himself opening the box which contained the onion and palm wine on Instagram on Thursday.

The box was branded in the cover art of Basketmouth’s recently released Yabasi album.

“Thanks my friend and brother @basketmouth,” Okey wrote.

Basketmouth’s Yabasi album was released on November 20, it has 10 tracks in it with features from the likes of Flavour, Phyno, Ice Prince, Peruzzi, Duncan Mighty among others.

“Once you date me, it’s either our wedding or your funeral” – Lady sparks controversy online