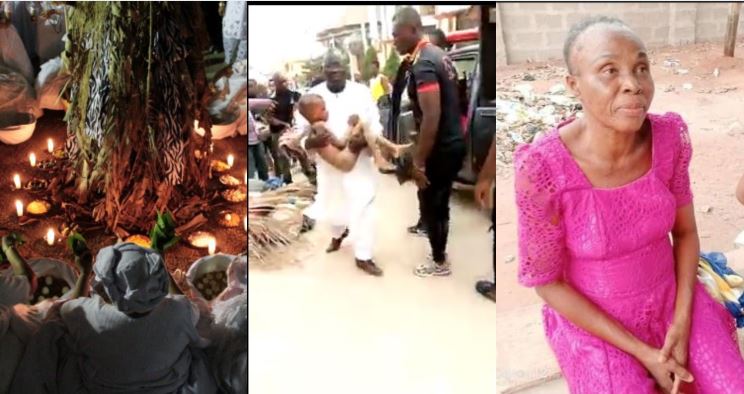 A prophetess who lures and kills children in her church for rituals has been nabbed in Onitsha, Anambra state.

Battered children were rescued from the house filled with fetish items where they were locked up and abused by the alleged female ritualist, 80-year-old Chidi Felicia Nwafor who parades herself as a prophetess alongside her accomplice, Rejoice Raymond, 39.

It was learnt that many other children were found unconscious in the woman’s home at 3-3 area of Onitsha.

3 children battered beyond recognition were rescued from a room filled with fetish items and the two women who held them hostage have been arrested in Anambra state.

According to the Anambra state police, the women have been arrested by police operatives attached to 3-3 Police Station Nkwelle.

READ ALSO: 17-Year-Old School Girl Who Tried To Shoot Teacher In Cross River Finally Reveals Who Gave Her The Gun

According to the Anambra state police, the women had “subjected them into physical and emotional torture without feeding and inflicted several wounds on their body leaving them unconscious.”

Some sources allege the women own a ministry but also engage in fetishism, including pounding children in mortar.

The children were rushed to the hospital where they are now receiving treatment.

Consequently, the Commissioner of Police CP Monday Bala Kuryas, has ordered a discreet investigation into the circumstances surrounding the case after which suspects would be brought to justice.

(Video) Singer, Terry Apala caught in bed pants down with a lady after allegedly abandoning his pregnant girlfriend