BBNaija Ka3na continues to lambaste fan who tattooed her name, despite being suicidal

Big Brother Naija ex-housemate, Ka3na has continued to lambaste the fan who tattooed her name and decided to commit suicide because she rebuked her for doing such.

Recall that a few hours ago, it as reported that the lady tattooed Ka3na’s name on her body and got rejected by the celebrity. The lady, however, was reported to have taken poison and landed in the hospital.

Reacting to this, Ka3na took to Twitter to condemn the girl again and also to say that she was blackmailing her emotionally by trying to commit suicide.

‘Its a big deal’ – BBNaija Nina and her…

THANK YOU FOR THE THOUGHT OF TATTING MY NAME ON YOUR PRECIOUS BODY… But that’s all you get for being so desperate as to faking something as deep as SUICIDE. I started life @ 16yrs! I was never desperate!!! My Hard work and CONSISTENCY Brought me this far!

I HAVE MY OFFICIAL LINE ON MY PAGE, DID SHE AT ANY TIME CALL NOR DM ME BEFORE SHARING THE SAID VIDEO AND PICTURE ONLINE?? I FOUND OUT WHEN I STARTED GETTING TAGS FROM BLOGS AND SO I REACTED PUBLICLY AS WELL…???

NO TO EMOTIONAL BLACKMAIL AND CYBER BULLYING.” 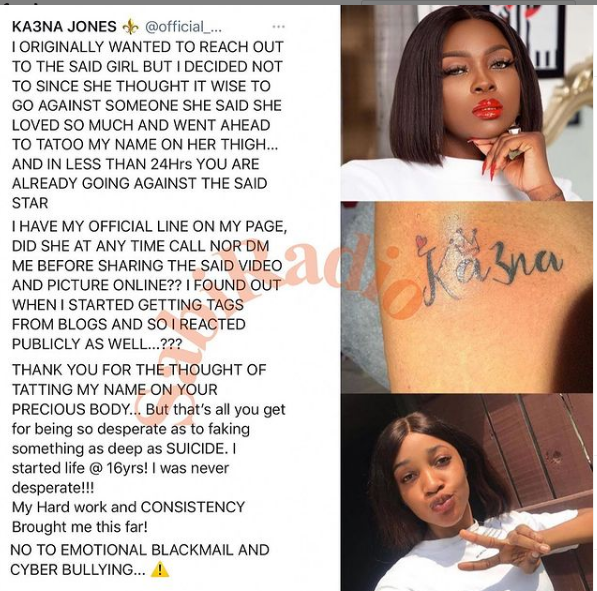 Nkechi Blessing replies Bobrisky, says he has a leaking ass and that’s why Tonto Dikeh dumped him