A lady identified as Roselyn Victory O’Neill took to Facebook to share the horrific tale of how she lost her arm due to domestic violence.

Her ex-husband accused her of cheating and stabbed her severally on her hand and leg which eventually led to an amputation.

Yes, Today is the 4th month since the sad incident and I’m grateful to God and Him alone always.

Here is the story:

On the 27th of Dec 2020, I woke up tired around 5:30 am to arrange myself, and by 6 am I was on the road because tired or not I must provide for myself as usual, and to do that I need to hustle day and night.

Firstly I went to atakpa here in Calabar to get things for my pepper soup and to watt market to get other things. Yes, that morning I was blessed but never knew what the devil had for me, I sold off everything before 1 pm or thereabout and I was happy about it.

Was so tired to make soup for my clients. Mind you I didn’t even have a bath before leaving home as I thought I was gonna get home from the market to do that (that’s my spirit oh I no want hear say I lose my customers).

I called Michael(My ex-husband)to please get me the meat I had in the fridge as I couldn’t leave the stand due to high orders, and I was alone – all my store helpers I had left for Xmas. I needed to cook, serve, pack plates, pack bottles, wash plates, pots, glasses, and lots all by myself.

Later on, my distant relative came and my niece too to help out I was glad they came. Around 6 pm Ex husband came with my son(Othniel) and the meats which I prepared and because I already had orders, in 30 mins the whole shaki and kpomo was finished and more orders still came.

I rushed to bogobri, had my bath, and change of clothes to get set for the day. Still been in my business mood which some friends know I don’t joke with anything business.

An old friend whom I haven’t seen in about 3 years or so, came around the Christmas village(somewhere close to where I had my stand), but the stand he went to didn’t have what he wanted, he was directed to my stand. He got there and saw the stand name “O’Neill” and told my sister(relative) that he recognizes the name and being that the name isn’t common it was easy to tell.

My helpers left around 8 or so and I was left alone again to do everything. It was then announced to all customers that we will be closing by 11 pm instead of the regular 9:30 pm which was as a result of curfew in the state then.

Then my boy had slept and I advised my ex-husband who was carrying him, to take the baby home that today being the last Sunday I have to make my sales cos we do sell much on Sundays, that I will be coming home immediately am done. Uncle agreed and left.

When everything ended around 11 pm,I was not just tired but weak as I hadn’t eaten in days (no time to even do that).

I stared at the bottles, plates, cups, pots.. how do I start arranging, and if u leave them outside, ur cups and bottles are gone the next day as fellow vendors will do you a favor by taking them all.

I wanted to take the risk cos I needed to be home to bathe, rest and get a good sleep on my bed. 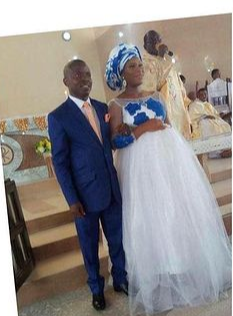 I called the driver who usually takes me home to come to pick me his number wasn’t going through. It had gotten very late already and all I needed was to sleep and I didn’t mind sleeping at my stand as it wasn’t unusual during festive periods like Christmas.

This friend of mine was still around too enjoying the cruise of Calabar he has left for years. He had tried calling Bolt but the charges were high and the probability of even taking me to home was uncertain so I decided to spend the night there.

The friend also decided to join. It wasn’t unusual, there were many people around, security personnel and all… The place was just busy and rowdy as. Calabar cultural center would be during the Christmas period.

I made spaghetti for both of us to eat, we discussed (strictly business) and then I slept off on the chairs I had arranged.

I never knew oga has gone home and returned to the stand, made all the preparations cos I didn’t return home and he came in the company of his colleague at work.

Like I said I had slept off never knew about my friend. The next thing I heard was Michael’s voice beating the table that was in front of us. I opened my eyes and there the drama started, calling me names prostitute ohh, cheat oh plenty I no fit count. I am cheating on him bla bla bla this time accompanied by an anti-cultism man that was on night duty. 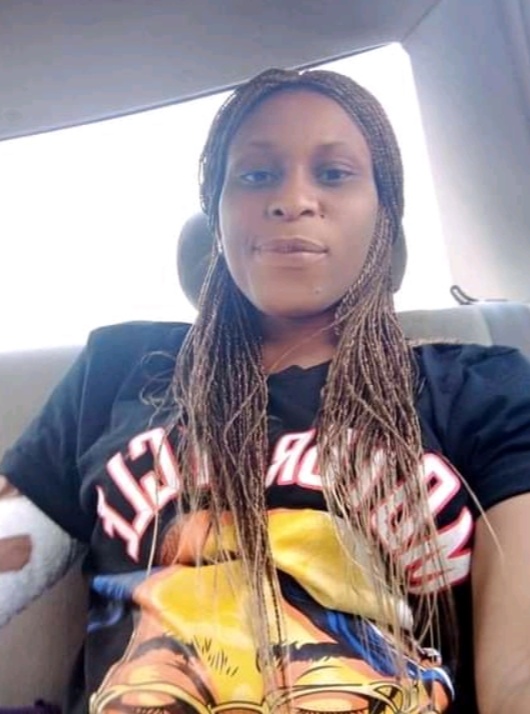 I couldn’t understand how sitting on a chair turned to cheating. My friend even tried to explain to him that it’s not actually what it is after all he never met us in a compromising position or even close to each other… we were far apart from each other. Hubby didn’t care to

listen to what any of us had to say.

Me here sleep still d my eye oh and was overtired and with a severe headache. I asked what he was doing? how can he accuse me when u haven’t caught me in the act,if I had wanted to do anything oga hotels don finish were I go do for cultural center field haba na ogaaaaaaa.

He told me ” if u don’t kill me this night then am sure of killing u”. I tried standing but my leg was weak and I had to sit back. I then asked him what statement was that cos I don’t like rough talks.

Abeg sleep still d my eye sef oh …. as I got up to give him space,I saw him remove something from behind him, heaven knows I thought it was a belt and he brought it straight to my left chest, thinking he wants to beat me with it, as usual, I used my left hand to block

what was coming, that was when I felt a deep pain and then I knew I was done for.

He repeated the stabs like 3 times still aiming at my left chest by then I fell to the ground, couldn’t shout, couldn’t talk, couldn’t scream couldn’t move cos I was weak and in pains now too… and the place was dead dark that no one knew what was going on. That was when my friend shouted and when hubby saw he couldn’t get my chest he now went to my right legs and lap and stabbed me more than 10 times.

Ogaaaaaa u no get conscience say na person pikin were labor pain the mama to born u d slaughter so like chicken so oh goshhhhh. 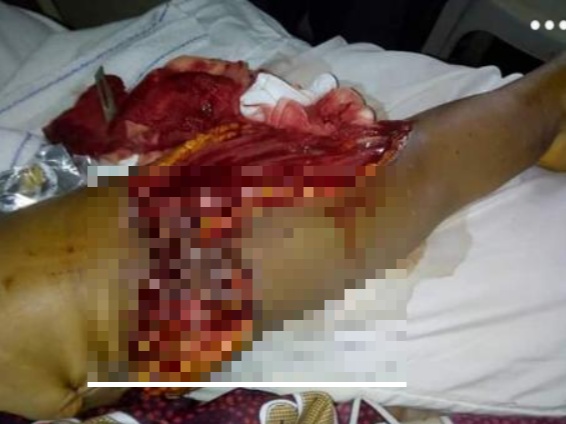 I passed out, I collapsed like a building without a foundation, I was helpless like someone without hope, I fainted like a b*stard,I died like an orphan (which I am).I laid down lifeless, breathless, and hopeless. I never knew what went wrong.

All I heard myself say was calling out my children’s name, my little son Othniel was all in my head, my siblings.

Then I went off.

I tried with all the strength God gave tome to stay alive, begging God for help for the sake of my children. And the good news is He heard the prayers.

I woke up hearing voices saying she is back, she is alive, let’s rush her to the hospital.

Hours later I went into the theater. 3 surgeries were carried out on me; in the hands, and 1 on the right leg. 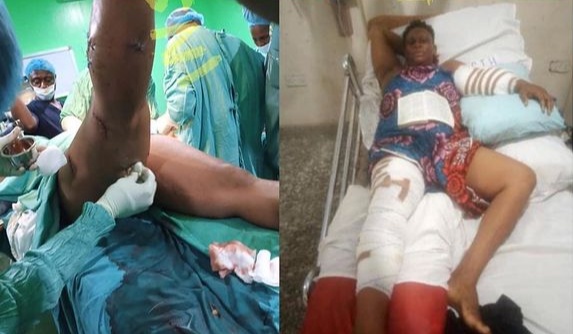 After weeks the left hand died, sir to infection from the knife used, and was amputated on the 20th Jan 2021.

He was arrested and was bailed after 3days and later was rearrested again right now the case is in court, but he was bailed out again.

And in the hospital money for surgery was needed during my stay there, I still called him oh, he said he was coming

with the money, the money needed was over 300k and uncle came with 20k …funny right? Yes it is funny.

I screamed, I talked oga abuse me oh calling me the names he is used to and even wanted to beat me oh if not for my brother and cousin hmmmmmmm.

I have caught him countless times with women, even on our bed when courting,na condoms I want talk that will be scattered around my house.

Even when in the hospital, after my discharge, I needed to pick something urgent from his house, I saw condoms and man power drugs in his bags. I smiled but this is someone that sees me as a cheat oh.

Anytime I ask for money he will say he doesn’t have it but I will see alerts sent to women in thousands of naira and hundreds of thousands, but madam no fit see 1k collect… tell me why I shouldn’t hustle for my money?

Now he has kept me handless, how do I cook and hustle to take care of myself as I use to? Cos I am not a begging type oh. 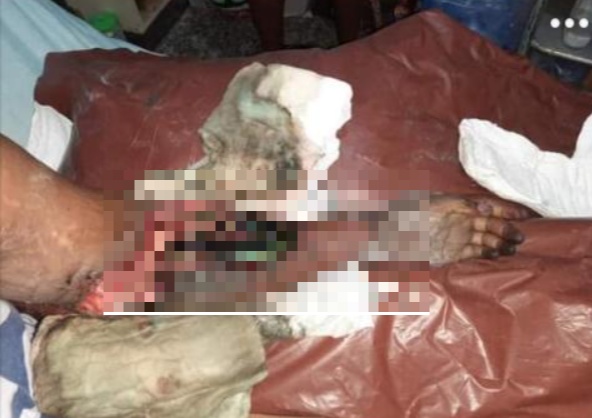 How do I deal with this now? Cost of prosthetics is in millions, where poor pikin like me go take this kind

money from after millions have already been spent na? See me see wahala ohhhh.

We got married 2018, 24th Nov. we did our HIV test and we summited negative. But discovered this young man has

been HIV positive and been on drugs since 2017 and when Roselyne asked he said he owes me no explanations, let alone apologies.

Na so I carry myself run go hospitals for test oh and then did same for me son, including Navy hospital… Yet I never left

and I never cheated.

I suffered a big deal but since I look troublesome… People say, yes she is the cause. Even some maternal family members see me as that…But he humbles himself… He is the angel and am the demon.

But una see this God he is NOT stupid. He kept me alive for a purpose and it has to be fulfilled.

My total restoration is as a result of just 2 special people 1st God and the Second yet to be revealed. I can’t thank these 2 people enough.

And my siblings too I heart u all.

And my school mates, groups and all I appreciate u alllllllllll.

For you all that needed the story.