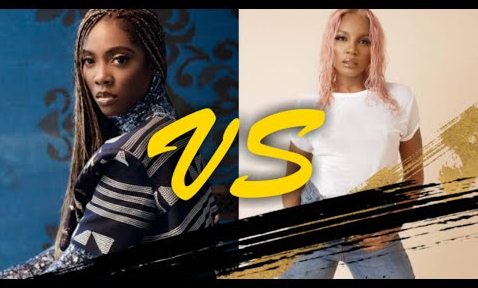 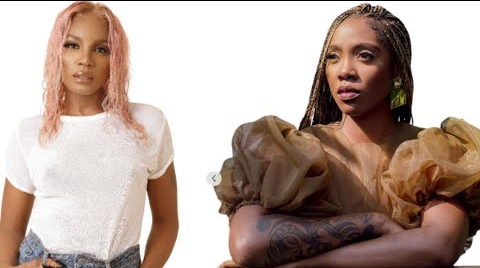 Tiwa Savage, aka African Bad Gyal has aired a side to her that no one has ever seen in public today as she takes on a fight with industry colleague, Seyi Shay in a popular saloon in Lagos.

Social media is currently agog following the leakage of a 1min 40-sec clip of Tiwa and Sheyi Shay exchanging words and almost exchanging fists in the saloon. According to the video, it all started when The Voice Nigerian judge, Seyi Shey walked up to Tiwa Savage to exchange pleasantries, and apparently, Tiwa was not having any of it as she flared up and made reference to a 2-year-old vendetta between them 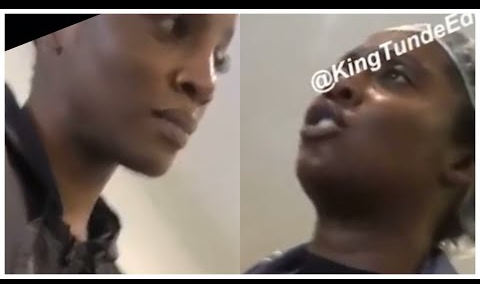 Seemingly, this was the first time Savage and Shay have said hi to each other since Kizz Daniel’s viral #FvckYouChallenge in 2019, during which Shay and Victoria Kimani seemed to take aim at mama Jam Jam .

Eyewitnesses say that Shay went over to say hi to Ms. Savage, who rejected the pleasantries and chose the moment to air her grievances.

Read the transcription below

Tiwa: I’m quiet. I don’t want to respond properly, I don’t want to disgrace or embarass you. You or me because we grown, but don’t think you guys [you and Victoria Kimani] can do what you did…

Shay: I’m not going to listen to this. You got your facts wrong…

Tiwa: Listen, don’t come to me and think you can say hi to me with the dirty and disgusting spirit that you have X2. You think I’ve forgotten what you and Victoria Kimani did how many years ago? You think I can forget?

Shay: Tiwa, what about the things you have done? I’m not like you, I’m not going to do that.

Then a ruckus ensues as the camera fails to capture footage. But it seems like both vixens were ready to go at each other, especially Tiwa Savage. The conversation resumes;

Tiwa: If you have the nerve, open it.

Shay: Open what? I’m not petty.

Tiwa: I’m petty. Open it!!! Open it [sounds like a physical confrontation] Shebi it’s you that said you wanted to open my nyash now. See open it!

Shay: I am not gonna do that.

Tiwa: Listen, on my son [Jamil]… On my child, [says that “I gave birth to” in Yoruba], I will never.. God should take my child if I have ever said anything about you or Victoria Kimani. Bitch I’m made, I have money, I have nothing to take from you. I’m not going to be hired for a show and…

Shay: You think that’s what it is, Tiwa?

Tiwa Interjects: I have never said anything else.

Shay resumes: If you wanna start acting up and acting like an agbaya right now. Carry on…

Shay: I only wanted to squash…

Shay: I went on interviews and said shit? Tiwa, let me not open your nyash here, please.

Tiwa: Open itttt! Your nyash is the dirtiest in this industry, you fucking whore. *Says in Yoruba* There’s nothing I’ve done in this world that I regret. There’s nothing, everybody knows I work hard for my shit. Look at you, you look half dead. You need to mind your business, to get a clearer skin.

[A chorus of “Whore!” ensues in the background]

How It All Started:

In January 2019, Nigerian music star, Kizz Daniel started a viral challenge tagged #FvckYouChallenge. The intial song from Daniel was a carthatic one for him, where addressed a cheating ex with some serious bouts of warranted slut shaming. The challenge was then jumped on by other celebrities like Tiwa, Seyi Shay and Kimani who later used it as a medium to air hidden beefs.

In Tiwa’s version, she detailed the affairs of a cheating ex whom she sent to Canada with her money. She also sang about how that ex who still owes Club Xscape – a Lagos nightclub – money for 50 bottles. At the time, many rumoured that shots on the song were aimed at her ex-husband, Tunji Balogun, but those claims were quickly dismissed.

The following month, Kenyan singer who was formerly signed to Chocolate City jumped on the challenge and rolled out disses for YCee and Tiwa Savage.

It’s becoming a maze at this point as it keeps getting complicated. Further findings show that all this beef and exchange of words may have stemmed from one man in the music industry which is no other than Wizkid.

According to a report by Pulse, In 2015, unconfirmed rumours swirled that Kimani was the source of the breakup between Wizkid and Tania Omotayo, his then girlfriend. A picture on the internet has since confirmed that Wizkid and Kimani might have remotely known each other.

You might recall that between 2018 and December 2019, there were public hints of sizzling affair between Wizkid and Savage. They even appeared together in Wizkid’s video for ‘Fever,’ which was what the camel’s back.

In a tell-it-all session with Ebuka on BlackBoxInterview, Savage directly responded to Kimani for the first time. Watch the video below:

So sad, Actress Omoni Oboli narrates what she and her late mother went through in the hands of poverty when growing up