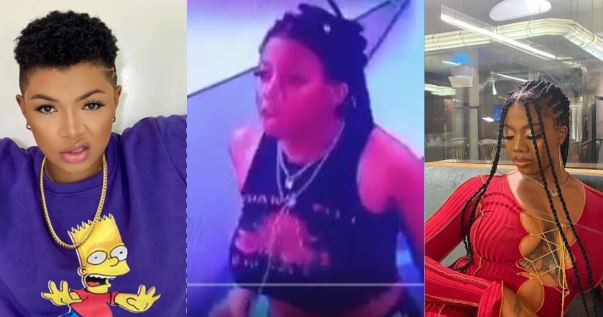 The first argument of the BBnaija 2021 has ensued between Liquor Rose and Angela during a games night session last night.

A video making the rounds on social media shows the housemates trying to keep Angel and Liquor Rose away from each other after an argument busted out while they were playing a game.

A few words were exchanged but peace and order was restored as the housemates called for the game to continue.

Meanwhile, A funny video of one of the BBNaija 2021 housemates, Niyi has hit the internet and it has caught the attention of many. Some of the housemates were seen in the video getting ready and also some whiling away time in the dressing room.

Niyi was seen standing in front of the mirror when female housemate Beatrice walked past him wearing a skimpy and short jumpsuit. Niyi was seen secretly admiring Beatrice’s ginormous backside as she passed by him to use the mirror.

Two Years After I Was Shot, Pellets Are Still Coming Out Of My Head – Actress, Angela Okorie Laments