Lady weds man she saw on friend’s WhatsApp status, shares chat on how it started 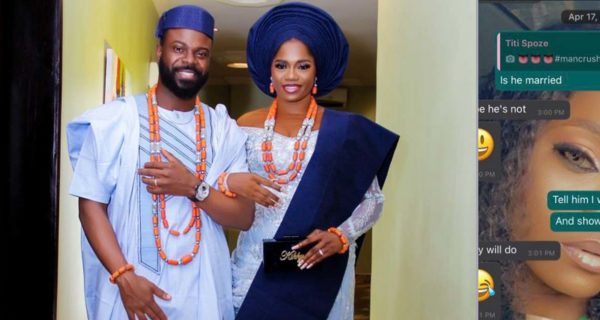 A woman is happy as she finally marries a man she met through her friend’s WhatsApp status.

The woman, who goes by the handle @Okiki_hurla on Twitter, used the microblogging platform to gush about her love life while also sharing a screenshot of how she shot her first shot.

“If your man doesn’t give you his atm card and his pin, he’s…

A photo of the man had been shared by a friend on WhatsApp Status with the caption:

She asked if he was married in response to the photo, and when she received a

negative response, she told her friend to tell him she wanted to marry him.

However, it’s clear that the shot fired hit the intended target, as she shared a sweet wedding photo of the two of them with the caption:

This man right here is my answered prayers 🙏❤️❤️”