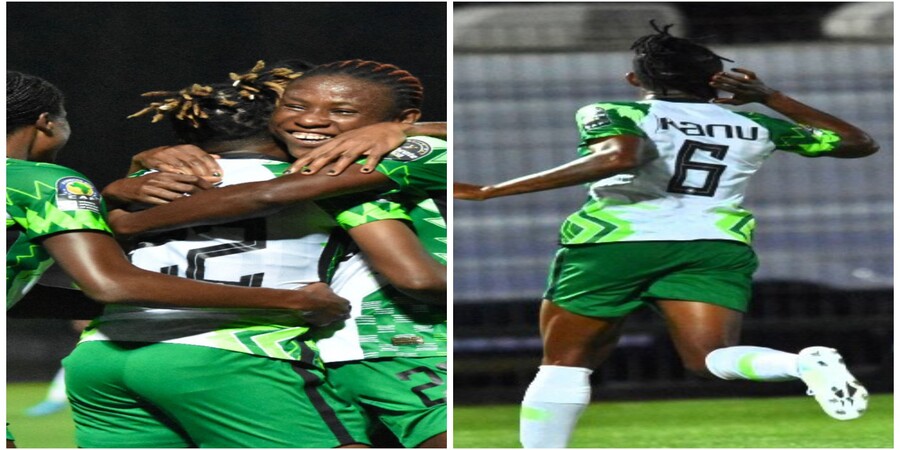 After defeating Burundi 4-0 on Sunday night, the Super Falcons of Nigeria secured their place in the quarterfinals of the ongoing Women’s African Cup of Nations in Morocco.

Following the foul by Burundian goalkeeper Belinda Ndoreraho in the 18-yard area in the 25th minute, Rasheedat Ajibade of Atlético Madrid scored from the penalty spot to give the reigning champions the lead.

The 22-year-old went to provide all the assists for the rest of Nigeria’s first-half goals which came from Israel-based Peace Efih and fellow African Women Player of the year nominee, Uchenna Kanu.

Kanu completed her brace immediately after the break after firing home from close range.

It not for VAR’s decision which saw one of Kanu’s goals earlier ruled offside, the Tigres UANL’s striker would had bagged her first WAFCON hattrick.

Only two Nigerian women players in the persons of legendary Perpetual Nwankwo, and Asisat Oshoala who are joint-record fourt-time African Women Player of the year, have score hattricks at the continental tournament.

With the victory, Nigeria finished second behind South Africa in group C.

The 9-time WAFCON winners with face familiar foes, the Indomitable lionesses of Cameroon in the quater-final.

Qualifying for the sem-final will earn the Randy Waldrum‘s women a world cup ticket.