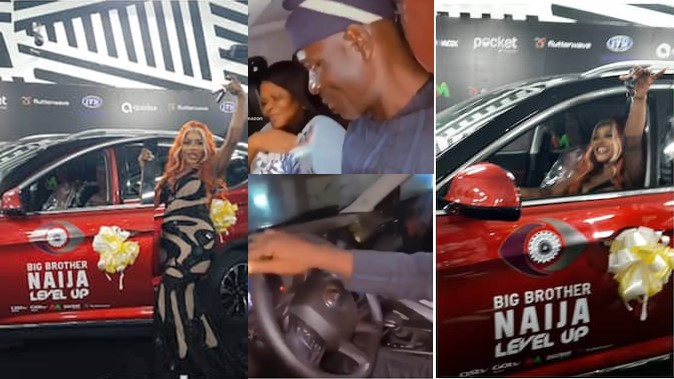 Phyna, the reality diva whose real name is, Ijeoma Josephina Otabor, received her N50 million check and automobile after winning.

After the remarkable car was delivered to her Phyna’s home, her mum and dad hopped inside to marvel at and enjoy the stellar interior.

While enjoying the moment, her father, Mr Otabor jokingly said that he would move the pricey car the next day.

In the background, someone could be heard repeatedly saying in an awestruck tone, ‘sharp car”.

It would be recalled that the BBNaija star was presented with the cheque and a car on Tuesday, October 4, as part of the grand prize for winning the Big Brother Naija reality TV show.

Phyna went home with N50 million cash prize, a supply of Pepsi, a bitcoin from Quidax, soap goods from Unik, electronics from Nexus, dairy products from Dano, packs of MunchIT, and cartons of Waw detergent, among others.

3 years after abandoning family for side chick, Nigerian man returns to plead for mercy (Video)