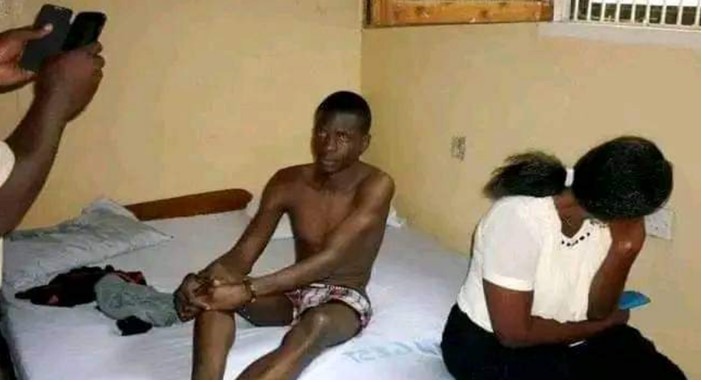 A Kenyan lecturer has been left angry and disappointed after he caught his wife having an affair with a student at a local hotel.

The man was said to have been aware of his wife’s infidelity but had no way to prove it. On a fateful day, however, he learned that she was with her lover in a hotel room.

“We shall meet in the future” – Lecturer tells project…

The lecturer stormed the hotel in Mosoriot, Nandi, and caught her red-handed with a student simply known as Brian.

According to local media, the man claimed that his wife had not slept at home the night before and that the young boy had missed regular school during the day.

The young student is said to be studying at Kenyan Medical Training College where the lecturer works.

After catching them red-handed, the lecturer shamed called the attention of people and shamed his wife by taking photos and videos of them.

A photo that surfaced online showed Brian in only his underwear as he did not have time to put on his clothes when the lecturer barged into the room.

Whereas the man’s wife covered her face in shame when he kept trying to show her face on camera and berated her for her disloyalty.