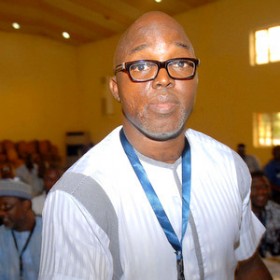 After all the confusion that has trailed the election of a new president for the Nigeria Football Federation, NFF, Delta State FA chairman, Amaju Pinnick, has been elected as the new boss of the Nigerian football house.

According to the voting process held in Warri, Delta State, on Tuesday, 30 September, 2014, Pinnick, who is also the chairman of the Delta State Sports Commission, became the new NFF boss through a run-off process after he could not get the two-third of votes in the first round of voting.

Supersport reports that the 43-year-old football administrator got 32 of the 44 votes in the run-off after polling 25 in the first round of voting during the NFF elective general assembly.

It was gathered that the vice chairman of Lobi Stars and former Nigeria international, Dominic Iorfa, ended up in second place with eight votes in the run-off after he initially received six votes in the first round of voting.

Former NFF secretary-general Taiwo Ogunjobi, who finished a distant second with nine votes in the first round of voting, came in third position with four votes after the run-off.

Meanwhile, the seventh aspirant, Shehu Dikko, was declared withdrawn from the NFF presidential election by the football federation’s electoral committee since he was absent.

Speaking to journalists after the elction, Pinnick said: “I am so excited winning the election and I will make sure I lift Nigerian football high when I assume office.”

Prior to the commencement of the election, there have been rumour that voting might not hold following a court order halting the elective congress of the NFF holding today.

It would be recalled that the world football governing body, FIFA, had given Nigeria up till today for a new president of the NFF to be elected.

This is after the country had been suspended and the suspension lifted by FIFA following the removal and reinstatement of former NFF president, Aminu Maigari.

With the election of Pinnick as the new NFF president today, it is hoped that the new board would put their acts together and get to work as the Super Eagles and the Super Falcons are have continental engagements next month.

The Eagles are expected to play Sudan (away and home) in 2015 Nations Cup qualifiers, while the Falcons would compete at the 2014 African Women Championship holding in Namibia.