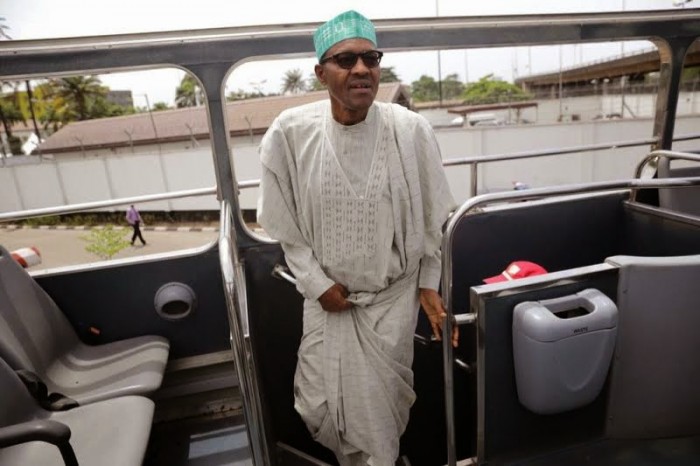 Court to stop Buhari’s inauguration – A group, Advocacy for Societal Rights Advancement and Development Initiative,has filed a suit before the Federal High Court in Abuja seeking to stop the Chief Justice of Nigeria, Justice Mahmud Mohammed, from swearing the President-elect, Muhammadu Buhari in.

Drama as lawyer appears before court in pastoral robe days… The suit is also seeking an order to nullify the certificate of return issued to Buhari by the Independent National Electoral Commission.
They filed the suit on the allegation that Buhari did not qualify to contest the presidential election because he gave false information about his academic qualification to INEC.
The Group’s lawyer, Mr. Philip Ekpo, alleged that Buhari did not meet the qualification in the 1999 Constitution and the Electoral Act to stand for the March 28, 2015 presidential election.
Buhari, INEC, the CJN are the 1st to the 3rd respondents in the suit respectively.
The group wants an order of interim injunction restraining the CJN “or any person acting in his capacity” from swearing in Buhari as President of the Federal Republic of Nigeria on May 29, 2015 or any other date thereof pending the determination of the motion on notice.
The suits declares states that the plaintiff seeks among other orders,

“An order restraining the 3rd defendant or any person appointed for such purpose from swearing in the 1st defendant as President of the Federal Republic of Nigeria on May 29, 2015 or any future dates whatsoever for giving false information to the 2nd respondent on oath.

“An order annulling the Certificate of Return given to the 1st defendant by the 2nd defendant.”

“The 1st respondent deposed to an affidavit dated November 24, 2014 that his West African School Leaving Certificate is in the custody of the Secretary to the Military Board.

“The 1st respondent has not met the qualifications enshrined in the 1999 Constitution of the Federal Republic of Nigeria and the Electoral Act, Cap E6, Laws of the Federation of Nigeria, 2010 (as amended) to have contested the position of President of Nigeria at the 2015 general elections.

“That the authority conferred by Section 140 of the 1999 Constitution (as amended) on the 3rd respondent to administer oath of office to any person who will occupy the office of the President of Nigeria cannot be exercised in respect of the 1st respondent who has not fulfilled the requirements of the same constitution and the Electoral Act as it relates to his eligibility to occupy the office of President of Nigeria.”

The case is still pending as it has not been assigned to any judge.
Punch.

What is she doing with that?? Photos of Rihanna holding a gun goes viral… (Look)

Dear men who lie to get s*x, there is something here for you!