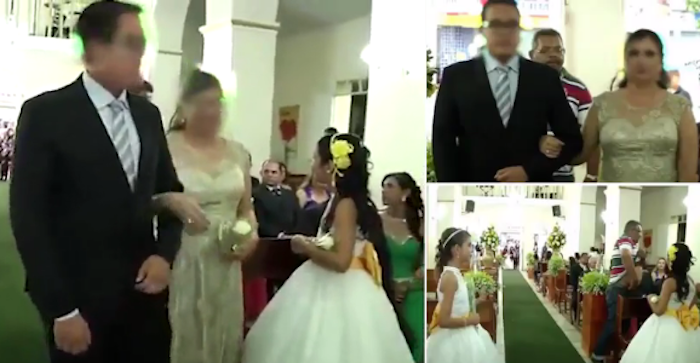 Man follows bride and groom: A couple’s wedding day is expected to be the happiest day of their lives, but that was not so for a couple in Brazil whose wedding was disrupted by a gun-toting, trigger-happy intruder.

Hardly had the bride and groom walked down the aisle to stand in front of the altar when the man, who marched in behind the couple, lifted his t-shirt, brought out a gun and began shooting

Guests and the couple scattered in different directions while some guests were brought down by the bullet.

Umberto Ferreira dos Santos, known by his nickname Betinho, opened fire at guests at the ceremony inside a church in Limoeiro de Anadia.
He was plotting to take out a father and son in a revenge attack over the death of his own boy, it was claimed.

62-year-old man Cícero Barbosa da Silva, and his 37-year-old son, Edmilson Bezerra da Silva, who were supposed to stand in as witnesses at the wedding were both shot. They were rushed to the hospital and have reportedly been stabilised. The gunman fled after carrying out the callous act.

Kemen admits that he loves TBoss but he doesn’t know about her s*xtape yet? #BBNaija