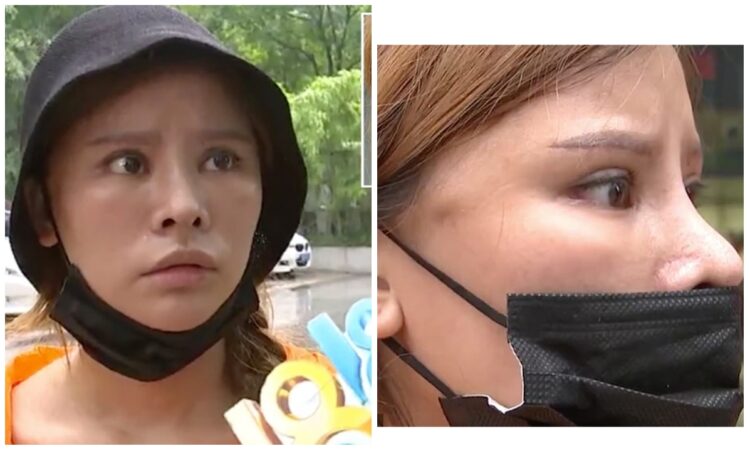 A beauty-conscious woman has been left devastated after botched plastic surgery gave her what she called a ‘permanent frown’.

The young Chinese woman, known by her surname Xie, now looks constantly upset due to failed cheek fillers she had paid £920 for.

Footage released by local media shows Ms Xie, with a nonstop confused look on her face, describing the cosmetic nightmare.

She was persuaded by the staff consultants who suggested her also to receive cheek fillers to ‘boost the effect’, according to the local press.

Ms Xie was horrified to discover that the surgery had changed her appearance for the worse.

The beauty clinic claimed that the frowning expression occurred due to after-surgery swelling that would eventually disappear.

Ms Xie said that she initially visited the cosmetic clinic in April to receive some non-surgical facial treatments – but ended up having a nose repair and brow-lift.

‘I had my nose done previously, but it was kind of a failure,’ Ms Xie told Zhejiang Television. ‘[After the repair,] the shape of my nose looked much better than before. I thought this clinic was trustworthy.’

The woman went back again for a facelift operation on May 7. The clinic staff convinced Ms Xie to get cheek injections to achieve the perfect look.

‘They told me if I do [the procedures] altogether, the effect would be much better,’ the Hangzhou resident said.

The beauty consultants also guaranteed the woman that the facial fillers would look very natural without needing much recovery time.

‘Because she had surgery along with the fillers, the final result still hasn’t shown.’ the manager told the reporter. ‘Once she fully recovers, it would look much nicer.’

Mr Fang claimed that the staff members who consulted the woman were ‘new and inexperienced’.

The manager told Ms Xie that the clinic would claim full responsibility if her face remains swollen after another month. He also offered Ms Xie some extra treatments for free.

But the woman said that she would not receive any surgery from the cosmetic hospital anymore.