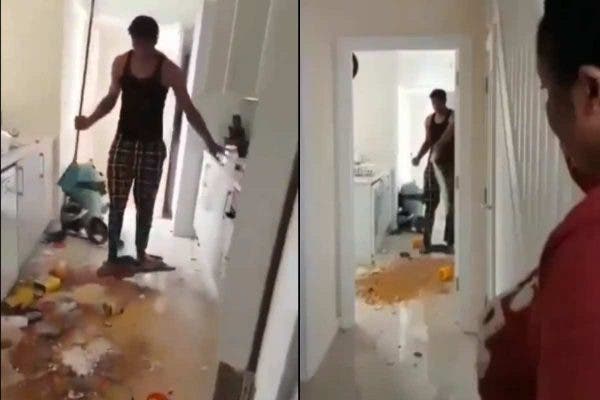 The young Nigerian boy, Chidera who was captured in a viral video trashing his mother’s apartment has come out to share his own side of the story. 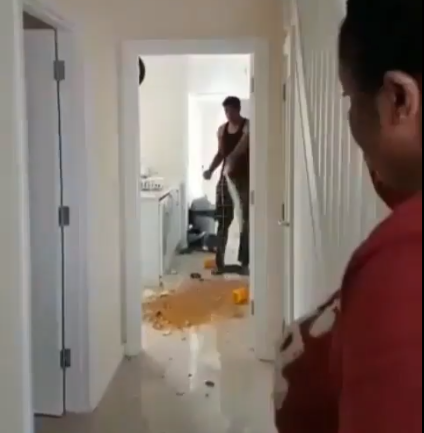 In the viral video, the boy is seen opening foodstuffs in the kitchen and pouring them on the floor. He ignored those trying to reason with him.

His mother was asked what happened and she said he came home and started demanding some things from her, including “P21” passport. She said he went into a rage when she didn’t give him.

The boy, who lives in Ireland with his family, has now shared his side of the story. He said his mother attacked him first but hers wasn’t captured on video.

Narrating what happened, he said the issue between him and his mum has been on for a while. He claimed that his mum is abusive and violent and he lives in fear. He added that he sometimes sleeps with his mattress by the door out of fear that his mother might carry out her threat to his life.

He said at some point, things got so bad that she wasn’t talking to him or feeding him. He also claimed she threw him out of the house about a month ago and the social workers and Gardai had to get involved. During the period he was kicked out of home, he said he was moved to so many places.

Later, he was advised to make things work with his mother, so he went back home together with some social workers. While at home, he asked for his passport to fill out college applications but his mother was not cooperative.

He said the people who escorted him home to make peace with his mother were there at the time and he told them that he was going to the kitchen to make himself a meal. While in the kitchen, he said his mother asked him who gave him permission to take her food. He claimed she attacked him, poured pepper in his eyes, hit him with a mop stick, and other things.

In anger, as he could not hit his mother back, he decided to destroy things in the house.

He said he is done with his family, including his father and brothers. He further stated that he feels nothing but hatred and disgust for them.

He wrote: “I feel nothing towards this family other than pure disgust and hatred for the way they all treated me ( my brothers and fathers included) And I don’t think I can ever bring myself to ever reconcile with them .. I have changed my number and deleted all contact with them.”

He added: “Everyone is entitled to their opinion and that is fine But as of now the family is dead to me and all I’m focused on is my future and college. Again I would like to sincerely thank everyone who knew that there was more to the story and knew the truth and supported me.”

Read his entire tweets below.

Firstly I would like to begin by saying thank you for everyone who has showed love to me.
I was very shocked to find out that my personal business was so publicly displayed and that the narrative was twisted and changed to portray me as a bad guy.

My actions as seen in this video wasn’t isn’t because of “disagreement” or a “passport” issue as my mum describes in the video.
My mum is a very abusive, aggressive and violent person… and she has been all my life.

When I say aggressive and violent, I am not exaggerating… I have endured plates/knives thrown at me.
I even have to remove my mattress and put it up to the door when I sleep for fear she will do something to me in my sleep as she frequently threatens to.

I have kept all of this very private… not even my friends and good friends knew. So I was in shock to find this video circulating the internet.
I have tried talking to her about it but she is to deep in her “Nigerian culture” to ever listen and ends up having aggressive fits

She then left me no other choice when she kicked me out of the house about over a month ago to report myself in.
This how social workers and Gardaí were brought in.
I was moved to numerous places over the duration of this month and feared going back to her abuse.

But after a conversation from the man and the woman seen in this video, I decided to go back home and make it work with my mum (with my social worker present of course).
Unfortunately, as you all can see this “peace” didn’t last long.

The day of this altercation, I had indeed asked for my passport to fill out college applications
But my mum wasn’t at all cooperative… in fact at this point … she had been ignoring me in the house and refusing to feed me
I was cycling to my friends house daily to eat.

So to avoid one of her violent outbreaks I went and looked for it myself without her knowledge.
When I couldn’t find it I did go back to her to ask her for it again… where she then began to be aggressive and violent trying to physically lift me -!: remove me from the room.

She was groping slapping and punching me… and obviously I will not fight my own mother back so I told her to stop or I would begin to break things
At this moment that was the only way I saw, for me to get her to stop without being violent back to her .. however she continued

The guards so made their way downstairs and I accompanied them because I wanted to make myself food… ( my mum was still present through all of this and didn’t voice her disagreement to me making food)
The guards told me to make my food and go straight to my room.

So the guards left and I was downstairs making food… when my mum came rushing downstairs hysterical… telling me I had no right to touch her food , fair
But I asked her why she didn’t say this when I told the guards I was going to make food .

She got angry and turned off the burner and trying to manoeuvre my way out of another altercation I went to the fridge to eat a cold leftover … she slapped it out of my hand.
What she did next was what provoked the actions you see in this video

She took powdered pepper and threw it in my face… and while I was still disoriented she grabbed a moping stick and reapeatedly beat me with it … she then grabbed me and bit me
I still didn’t retaliate or fight back .

After this vicious attack she then proceeded to call the three adults featured in this video, her exact words were “You better get here before I kill Chidera”
They were there in the next 5 minutes. I had to take off my t shirt and soak it and put it on my face to cool the pepper.

At the moment I just felt sheer rage and instead of getting physical or aggressive with my mum … I decided to trash the kitchen as u see in this video.
Looking back at it… it might not have been the best solution but I didn’t know what else to do.

The guards were called again and they returned just 30 minutes after they had left and detained me.
I was put into emergency care
And I have been in foster since that day last week.

I feel nothing towards this family other than pure disgust and hatred for the way they all treated me ( my brothers and fathers included)
And I don’t think I can ever bring myself to ever reconcile with them ..
I have changed my number and deleted all contact with them.

I have kept all this private to protect all of us as we can all be negatively be impacted by this.
But for me to come on social media and receive nasty death threats and messages and finding out they posted this video and painted the narrative completely differently.

You might all ask me why I didn’t correct my mother’s grossly false version of the events while I was smashing things.
The answer is I was so consumed by rage and anger after what had just happened to me.
And as u can see in the video I didn’t care about anyone.

Everyone is entitled to their opinion and that is fine
But as of now the family is dead to me and all I’m focused on is my future and college.
Again I would like to sincerely thank everyone who knew that there was more to the story and knew the truth and supported me. Sparkling heart
Love x