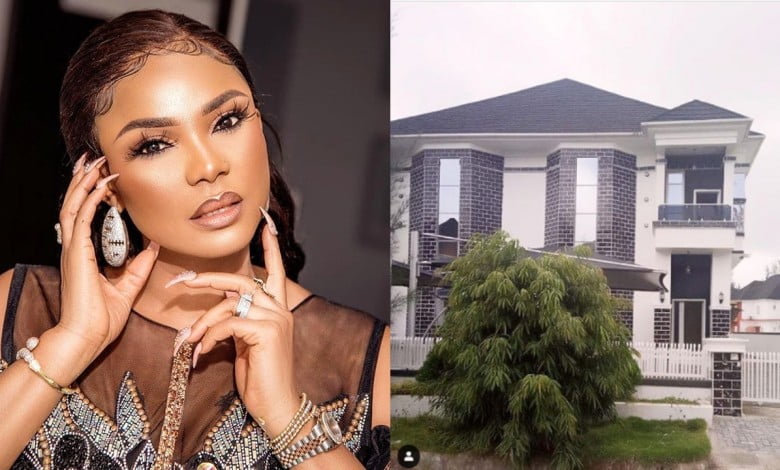 Not a few were amazed that Nollywood actress, Iyabo Ojo just acquired a new house in Lekki, Lagos.

Everyone thought she owned the apartment she lives currently.

Well, the actress took everyone by surprise when she shared a photo of her newly acquired five bedroom duplex in Lekki, Lagos.

This definitely elicited reactions from many of her colleagues, friends, and followers.

The flow of congratulations was overwhelming.

A delighted Iyabo Ojo wrote, “Finally God has done it & it’s marvellous in my sight ”

Even her daughter, Priscilla quickly took to social media to hail her mum for the new acquisition.

Priscy wrote, “Whoshhhhhhhhhhhhhhh CONGRATULATIONS on your brand newww house mama I’m sooooo happyyyyy @iyaboojofespris you deserve it!!!!!!. I can finally say we have a house.”

Then, Iyabo Ojo’s best friend, Tosin aka Omo Brit, who was an actress before relocating to the United Kingdom, revealed Iyabo’s ordeal in raising her kids and ignoring been a house-owner.

iyabo Ojo is a single mother of two and would always reveal on social media that she is solely responsible for her children’s upkeep.

Omo Brit, who revealed the mockery Iyabo Ojo experienced before she became a house-owner, wrote, “Yipeeeeeee….. While I am still waiting for a clearer picture, I cannot seem to hold myself…. this is not only huge to me, it is a dream come true. You referred to your children as your house when @gloayoade asked why you haven’t gotten a house. You refused to be mocked when people jokingly say you don’t have YOUR OWN HOUSE…. you adopted a quote “when the time is right, mercy will have no choice to locate you”…. Aduke, I am over the moon…. this is huuuuuuuuge….. @iyaboojofespris welcome to the world of a 5 bedroom duplex home owner in the heart of Lekki…. it ain’t bad at 42…. you did it in a biiiiig way @iyaboojofespris….