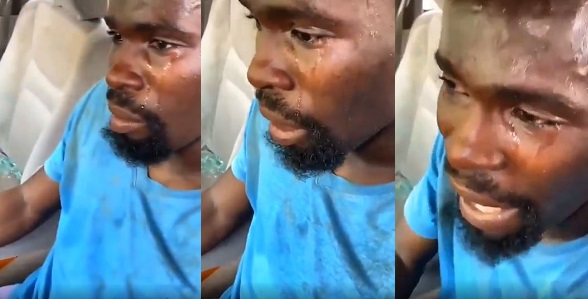 Reports have alleged that Pro-SARS thugs were deployed to the Berger area of Abuja to cause chaos in the ongoing #endSARS peaceful protest in Abuja.

It was gathered that they vandalized cars in the areas and attacked the peaceful protesters.

In the video sighted online, a man was seen crying uncontrollable inside his destroyed car after being attacked by the Pro-SARS thugs.

The man revealed that he was on his way to see his pregnant wife when he was in caught in the gridlock caused by the protest.

His car was unfortunately destroyed by the thugs. The man, who was lamenting bitterly in the video stated that he didn’t do anything to deserve this vandalous act.