Ladies bare it all in the latest social media dance trend, #Silhouettechallenge (Videos) 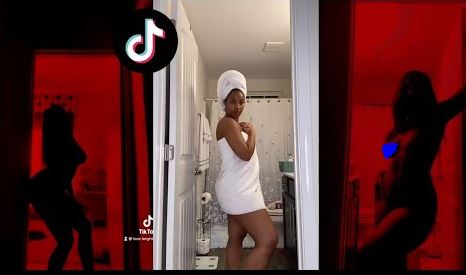 Every point in time, a new challenge or the other is brewed up on the social media space. The latest challenge dubbed The Silhouettechallenge has stayed atop the trends on the internet as more ladies join the dance craze that sees them scantily dressed in a sparsely lit room.

The challenge which emanated from video sharing app, TikTok sees a dance routine which usually features ladies typically dressed down while dancing to Paul Anka’s song, Put Your Head On My Shoulder released in 1987 and stripping when Doja Cats’ song, ‘Streets’ which was released in 2019 comes on.

The women dance under red lights allowing viewers to only see the silhouettes of their naked or unclad bodies as they were. Even though the red light only shows the silhouette, the wrong shade of red, as observed in some of the videos means people can see more than just a silhouette

Read Also: ‘Your backside is just big for nothing’ – Fans mock Nengi over awkward #BussItChallenge video

And there are speculations that with the aid of virtual reality and plugins for smartphones, viewers can see beneath the red lights. The challenge comes on the heels of the #bussitchallenge where girls twerked to a mash-up of Kelly’s Erica Banks’ Buss it.

The Challenge sees an individual begin the video in casual clothing, messy hair and no makeup, dancing while facing the camera. When the beat drops, you drop to the floor into the Buss It pose, transitioning into a glamorous outfit with hair and makeup to the nines.

See some mouthwatering videos from this new trend below:

Bobrisky gifts a loyal fan N1Million, a phone and an all expense paid trip to Dubai for tattooing his face on her body

Third Mainland Bridge to be closed for 3 Days, from January 30 – February 1