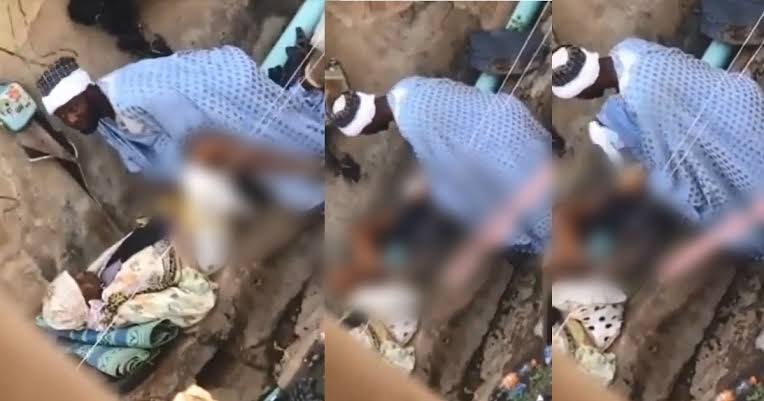 An alleged Islamic cleric was filmed having carnal knowledge with a mentally ill woman in Ibadan, the capital of Oyo state.

The ‘alfa’ was spotted by two residents of a nearby house, who videotaped the incident and shared it on social media.

In the video currently trending online, the mad woman is seen lying down in a very dirty environment while the alfa who had pulled his trouser and briefs down to his ankle level, was seemingly penetrating her with his manhood.

The observers who filmed the shocking incident could be heard talking in whispers in the background as they criticized the Islamic cleric for engaging in such act.

“This one is happening live in Ibadan o. Jesus Christ. Ahhhh. A man of God for that matter,” the man says as he continues filming.

The woman interjected and said it’s Alfas like him that spoil the reputation of good Alfas and men of God in Nigeria.

While they were still talking, the alleged Alfa brought out a calabash from a polythene bag, opened it and removed a white handkerchief which he used to wipe the mad woman’s private part.

He then returned the handkerchief into the calabash and left the scene.

“There’s nothing else a man can give a woman apart from money” – Relationship Expert, Blessing Okoro (video)