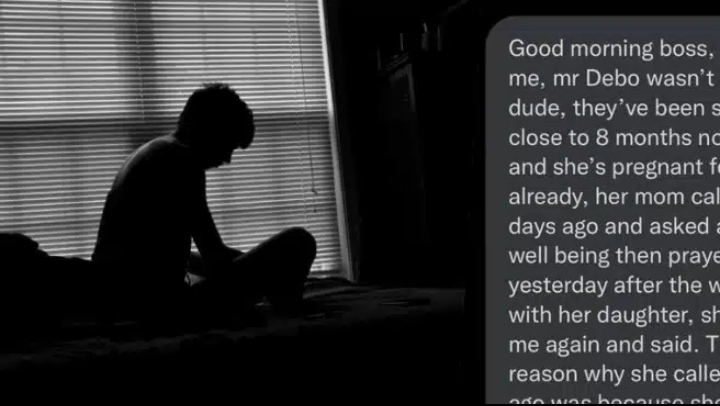 A young man is devastated to learn that his girlfriend’s mother knew she was having an affair and became pregnant for a kind stranger who had earlier paid her N300K in rent.

Adeshina, a Twitter user, recounted how his girlfriend once requested N50,000 from him in order to pay her N250K rent.

Fortunately, the weight was lifted off his shoulders when his girlfriend received N300,000 from a stranger, which he took to be a random act of kindness.

In a Tweet, he wrote, “My babe house rent is 250k, she begged that I help her add 50k, I still dey hustle the money when one guy she met 3 weeks ago sent her 300k. She told me about it and all I did was scratch my head and say God is a miraculous God.”

When asked how he suspected something was off, Adeshina responded, “You’re right boss, I just checked her small phone, and this is the message she sent to the guy, he saved his number as mr Debo.” Adeshina who didn’t stop there reached out to his girlfriend’s mother who opened up that her daughter and the said helper have been dating for over eight months.