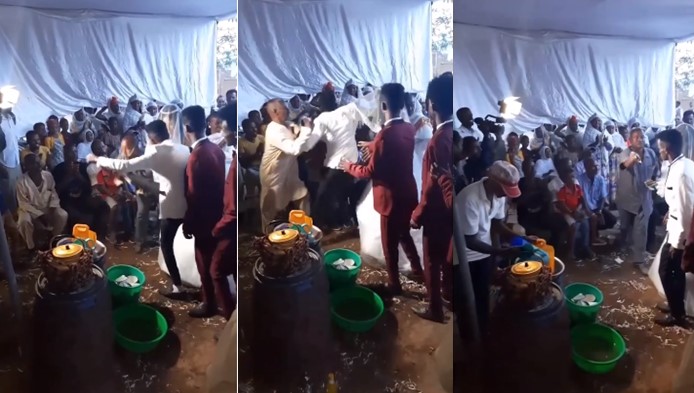 A video circulating on social media shows a groom getting into a physical altercation with a man at his wedding.

During the wedding reception, the man and his wife were dancing when one of the guests stood up and began dropping cash on his forehead.

A closer look at the visitor reveals him licking the money before rising from his seat.

The groom threw the money back at him, which fell to the floor, but the man picked it up and tried to spray him with money again. For reasons unknown to many, he began fighting the guest in order to stop him from doing what he was doing.

He threw punches and kicks at the guest and it was so intense that other attendees had to intervene and hold the groom back.

Some netizens opined that the man was doing something fetish and the groom realised which was why he fought, while others suspected that it was his wife’s ex-lover.

badgalmanilow; Why he lick the money before he sprayed it?🤨🤨

dg01335; But nobody saw what the man did tho before placing the money on his forehead una just ddy laugh.