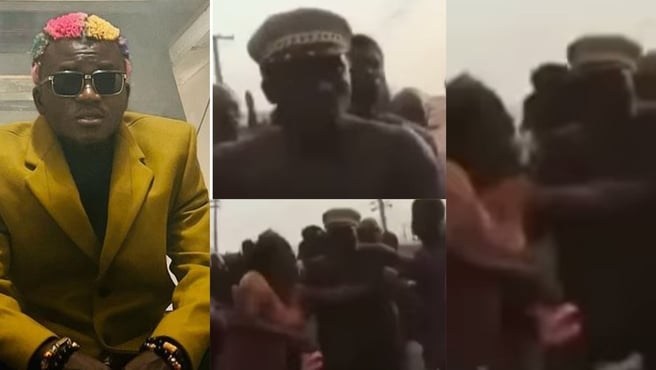 Habeeb Okikiola, a.k.a. Portable, a street singer, has landed himself in hot soup yet again after being spotted begging a victim he allegedly hit with his car in Lagos.

The incident was reported to have occurred along Ipaja in Lagos state.

A crowd of onlookers had gathered after the incident occurred in the video, and Portable was seen walking with the victim.

He could be heard profusely apologizing to the victim as they made their way through the mass of onlookers that had gathered.

Mixed reactions have trailed the video of Portable begging a female victim after he knocked her down.

“Portable this portable that, e no dey tire portable” – one Badgelquasar asked if the singer doesn’t get tired.

One Marlianbarber wrote: If portable beg you like 3 minutes and you nor hear baba go later change am for you ooo and you nor go see shishi again.

One Sirsuto wrote: No celebrity trend pass portable this year.

One Stymo opined that Portable needs to write a book: “This guy should write a book on ‘’how to trend everyday’’.

One westside_god asked how portable always made it to the media. He wrote: Portable cannot be a real person because how does he always find his way into the media.

One Deras_talk noted that the controversial singer causes problems almost everyday. She wrote: Portable must give problem every two market days.

One Kinsroyal wrote: If you see Zazu rolling on the floor on 31st crossover night just leave and mind your business. Na only him know Wettin him see this 2022.

One Priscillia Oluchi wrote: Zazu is a weapon ready to be fashioned every 2 market days, even against himself.

One Jeffery wrote: Portable is the village people that fashion against himself.