We are believing he is still alive: Family of medical doctor who jumped into Lagos Lagoon speaks up 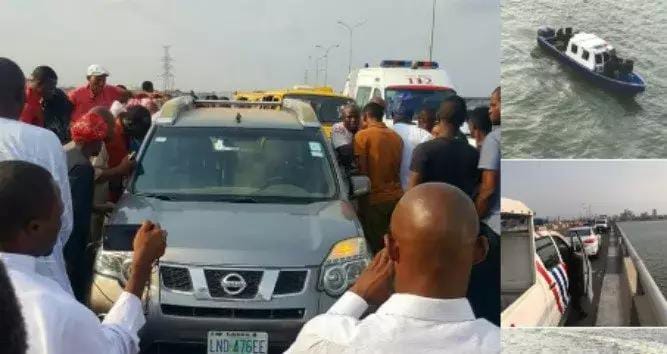 Man that jumped into lagoon: The family of the medical doctor, Dr. Allwell Orji, who killed himself on Sunday, March 19, by jumping into the Lagos lagoon has asked Nigerians to respect their grief.

A man residents described as a father figure to Dr. Orji said: “Please respect our grief. This is a difficult time for us and we don’t want to make comments on this issue. It is not something to be celebrated. We are believing that he’s still alive. God still does miracles.”

The Nation reports that the medical doctor lived with his widowed mother, Mrs. Chinyere Orji, a retired banker at her residence at 3, Odunukan Street, off Abule Ijesha, Yaba.

His mother is said to have refused to accept he might be dead and has been receiving comfort from family, church members, friends and colleagues of the doctor.

Journalists were denied access into the building, as relatives appealed that their moment of grief be respected.

According to them, neither the woman nor anyone close to the family was ready to make comments on the development.

One of them said: “You people don’t know what we have been through since yesterday. Please, respect our grief. This is not a case of a grandfather that died and we want to celebrate it. This whole issue has been difficult for us.

“The mother is up there, not talking to anyone. Not even us who are very close relatives. People have been around her since yesterday so that she doesn’t do anything drastic.

She has yet to accept that he could be dead. She doesn’t even accept people’s sympathies and condolences. As a Christian, she’s believing God that a miracle could happen and that her son won’t die. She believes he’s just missing and would return alive.

“We can’t allow you in. We won’t also comment on it. Not today, not any day. We are not interested in talking about this issue. But I can tell you he’s not the person in the picture they have been circulating online. That’s not my doctor. So many falsehoods have been circulated online in respect to this matter. We are not too pleased about it, but we won’t be pushed to comment.”

It was gathered at the Mt. Sinai Hospital, Olanibi street, Papa Ajao, Mushin, where Orji worked, that he was on duty Friday night.

Denying insinuations that he might have killed himself because he was sacked from his place of work, the hospital said he was a good doctor.

Orji who is yet unmarried was the first of his mother’s three children.

He said to be returning from the church, when he allegedly stopped the car, a Nissan X-trail with registration number LND 476 EE before diving into the lagoon.

The spokesperson of LASEMA, Kehinde Adebayo, explained that the agency was alerted by concerned Nigerians over the incident.

Efforts are still ongoing to recover his body from the lagoon.

Not long after the medical doctor incident, an unidentified woman was rescued after she attempted to kill herself by jumping into the lagoon from Maza-Maza bridge in Mile 2 area of Lagos state.

Adaeze Yobo shares photo of her Breastfeeding her baby