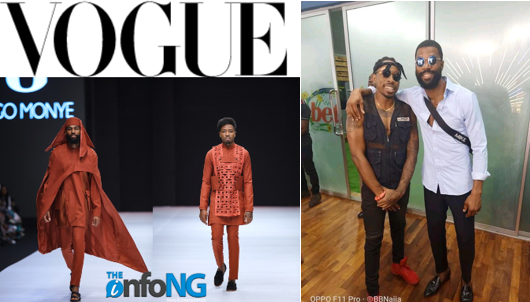 No doubt, Big Brother Naija 2019 has been the best and most valuable edition so far. I’ts safe to say that there are no losers in the Pepper Dem Edition. Fromer housemates, Mike Edwards and Ike Onyema who graced the runway at the recently concluded Lagos Fashion Week have both been featured on the official website of the global fashion giant, Vogue.

Ike took to his Instagram page to give shoutout to Ugo Monye, top designer whom he and Mike modeled for at the Lagos Fashion Week for giving him the opportunity to achieve such feat. Words have been going round on Social Media as everyone is looking for the proof from Vogue’s official website. See screenshots below: Ike was recently a guest at the popular TV morning program ‘Today on STV’ and he disclosed the current state of his romantic relationship with BBNaija 2019 winner, Mercy Eke. The lover boy couldn’t hold his smile when he was quizzed by the presenter about his girlfriend and he sheepishly revealed that he is now exclusive with Mercy. In his words: I and Mercy were just friends back in the house but now….She is my everything. Watch video here