Tonto Dikeh has said if Regina Daniels were a boy, he would be a dangerous heartbreaker to them ladies.

The actress and mother of one made the comment in a reaction to photoshopped images about her, Regina Daniels, Angela Okorie and Mercy Johnson.

The faceless person who edited the photos transformed the actresses into males while maintaining their own faces. In other words, dude gave us a fair idea of how the four Nollywood stars would look like if they were males.

While reacting, Tonto jovially said whoever is behind the hilarious photos won’t make it to heaven.

Tonto Dikeh who was obviously crushing on the male version of Regina Daniels, said he looks like a heartbreaker while she jovially said she would never date the male prototype of herself. 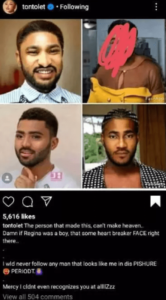