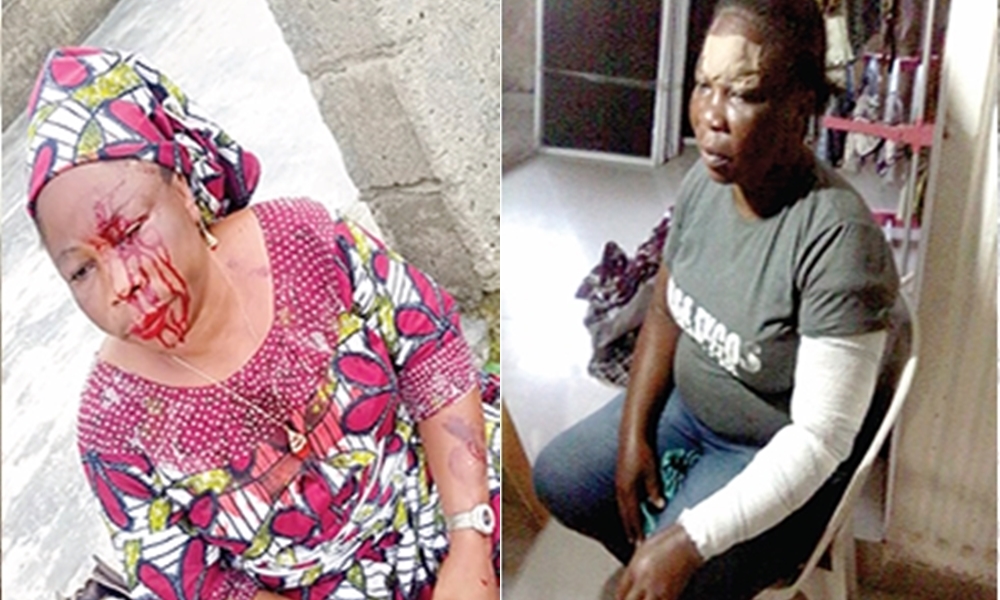 The family of one Mr. Bankole Taiwo allegedly attacked a cleric and his wife with guns, cutlasses, and other weapons over allegations the couple informed a vigilante group that they were holding a birthday party, contravening the COVID-19 guidelines in Lagos State.

Mr. David Fasipe and his wife, Toyin, were said to have told the vigilante group that the party was being held by cultists.

Narrating the incident to newsmen, Mr Fasipe, said some youths, including Bankole’s children, recently celebrated a birthday in a house about three meters away from theirs. He said that they partied till night making noise and disturbing the peace of the area.

He explained that at a point during the party some local vigilante group in the area stormed the gathering and dispersed the youth, adding that he and his wife were subsequently accused of informing the security operatives of the party.

He alleged that the youths had cutlass, guns, and other dangerous weapons.

“The matter appeared settled already and we went our separate ways. I was surprised when I saw Mr. Bankole and his son come to attack me when I was going to church.

“I was going to fellowship on Sunday, May 13, 2020. My husband had gone ahead of me on a motorcycle and I was to meet up with him later because of what I was doing at home.

“While waiting for a motorcycle that would take me, my son called me on phone discussing something with me, I was still on the call when suddenly Bankole rushed towards me and asked me where do I think I am going. Before I could respond, he punched me while the phone was still on my ear.

“When my husband later got to the scene and saw the manner I was treated, he then asked Bankole what my offence was. Before I knew what was happening, he attacked my husband too on the road and threatened to break the windscreen of his car.”

Mrs Fasipe, a mother of three, said the matter was reported at the Baale Palace who advised that they should report the matter to Igbogbo Police Station for proper handling of the case.”

She added that when she got to the police station she was asked to go to Ikorodu General Hospital for treatment and the station sent a policeman to arrest Bankole, but he didn’t meet him at home.

“When we returned to the police station, the policemen said I and my husband should go and look for how to arrest Bankole. It was then my husband hired Onyabo vigilante group who later got him arrested.

“After we left the station, I went back on Tuesday, for an update but to my surprise, the DPO told me the matter has been settled.”
Also speaking, the cleric alleged that his family has been a target because he refused to support Bankole’s ambition to become the chairman of the Community Development Association (CDA) of the area.

It was gathered that the Divisional Police Officer, Igbogbo, a Chief Superintendent of Police, CSP Ade Balogun, allegedly refused to detain Bankole, who is vying for the chairmanship of the community association.

The landlord was released the same day and allegedly returned to the community boasting that no one could arrest him because he was a relative of the DPO.

However, Bankole denied all the allegations, saying the case had been settled by the police and the Baale of their community.

He accused the Fasipes of raising a false alarm by reporting his children and that of other landlords celebrating at a birthday ceremony as cultists.

“Mrs Fasipe stays three streets away from my house. She came to the front of my house on Sunday and started making calls that she was in front of the youth godfather’s house.

“She made threats in front of my house. I went to ask her why she was bent on making trouble. I collected the phone from her and dropped it on the ground.

“She rushed at me and held my clothes. I pushed her away from me. She used her nails to cut herself and started screaming that I had killed her.”

“Some minutes later, Femi raced to the scene in his car and hit me on the chest three times and accused me of beating up his wife, while I retaliated with a slap.

When contacted, the state Police Public Relations Officer,(PPRO) DSP Bala Elkana, said Bankole was arrested after police personnel went to his house three times, stating that the DPO had no relationship with any of the warring parties.

“On the third visit to his house, he was brought to the station. All the CDA executive members came and said they could resolve it internally.”

“I beat craze comot for him head,” – Actress Nkechi Blessing beats up driver who bashed her car (Video)