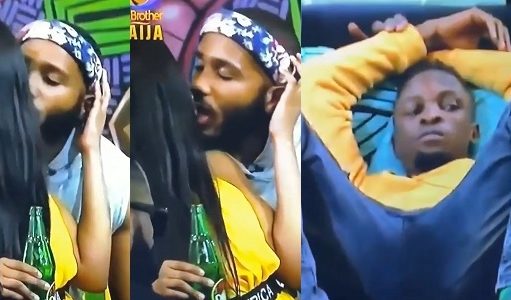 Big Brother Naija housemate, Laycon had a stern disdainful look on his face as Erica and Kiddwaya were locking lips while he watched them recently.

It’s no news that Laycon has feelings for Erica and he once upon a time professed his feelings for her, telling her that “he’ll feel bad if he went home today and he never told her”.

However, Erica is caught up in a love triangle with Laycon and Kiddwaya, the latter with whom she usually is more intimate with, much to the irritation of Laycon. Laycon, had one time, in a discussion with Prince and TrikyTee, revealed that he finds it irritating that Kiddwaya always intrudes anytime he’s about to spend precious time with Erica.

Erica and I might just be having a discussion and he’ll just come, grab her waist and start kissing her. I don’t even get jealous anymore, i just find it irritating, disrespectful and awkward, Laycon said to his peers.

Erica has however stated that she does not see Laycon as someone she’d want an intimate relationship with but has opted to be close friends with him.

According to the 26-year-old, she is into men who have a great physique which confirms what she had earlier told Laycon she is attracted to him mentally whereas she attracted to Kiddwaya

I’m not attracted to him (LAYCON) physically but his mind….. i wish there could be someone with his mind in Kiddwaya’s physical features, i’ll just fall.

In a new video that’s now been serving rounds on social media, with a lot of people having pity for Laycon, the singer is seen putting on a look of disgust as he watched Erica and Kiddwaya have at it again.

Nigerian have since felt pity for him as they feel he should move on from the 26-year-old who already stated that she has no interest in dating him.

BBNaija: Biggie advises Laycon on his feelings for Erica, tells him what to do