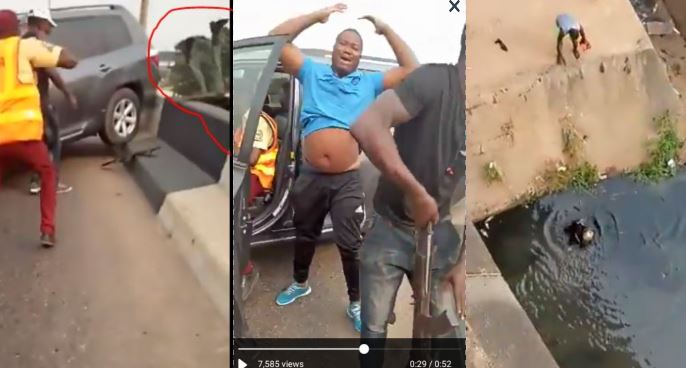 An errant driver has knocked a police officer off a bridge while trying to evade arrest in Lagos.

According to a video seen by TheInfoNG, a yet-to-be-identified driver was nabbed by police officers and men of the Lagos State Traffic Management (LASTMA) for violating the traffic law by using a one-way route.

In a bid to evade arrest, the driver in a Toyota Highlander vehicle reversed and hit one of the police officers behind, throwing him off the bridge into a canal below.

Luckily, the officer survived the fall as he could be seen trying to swim out of the canal. The driver was apprehended immediately.

Read Also: Know the difference between a ‘bus lady’ and a ‘boss lady’ – TBoss slams Ka3na over tattoo drama