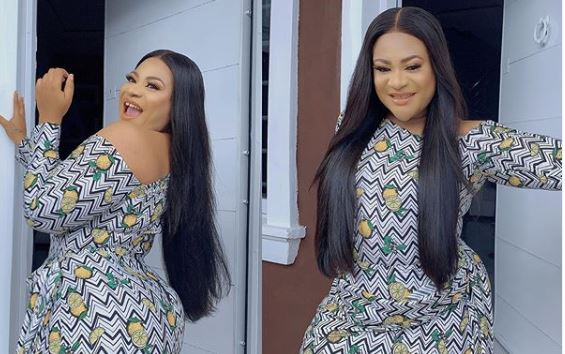 Nkechi Blessing, a controversial Nollywood star, is unconcerned about her suspension from the industry.

Following the arrest of Baba Ijesha, the actress was suspended from the film industry, along with her junior colleague, Lege Miami, for a social media feud that was deemed insensitive to the acting profession.

The actress said in a new Instagram post that no one should alter her personality for any reason.

Nkechi Blessing claims that she will continue to speak the truth regardless of who hates or criticizes her; she is unconcerned and unapologetic about it.

She wrote: Ain’t nobody changing who I am..I speak my TRUTH hate me or love me Walai Ko kan Mi UNAPOLOGETIC.

Recall that following her suspension from the movie industry, Honourable Opeyemi Flagen, the boyfriend of Nollywood actress Nkechi Blessing, sent her a message.

In an Instagram message, Opeyemi encourages Nkechi Blessing to always believe in herself, speak up, and never let anyone suppress her voice on any subject.

He went on to say that Nkechi Blessing should keep standing up for what’s fair, and that even though she fell seven times, she’ll get up on the eighth.
Nkechi Blessing responds to the post by expressing her love for her boyfriend and claiming that those words are the only support she wants right now.

Bobrisky discloses to fans what his boyfriend appreciates most about him