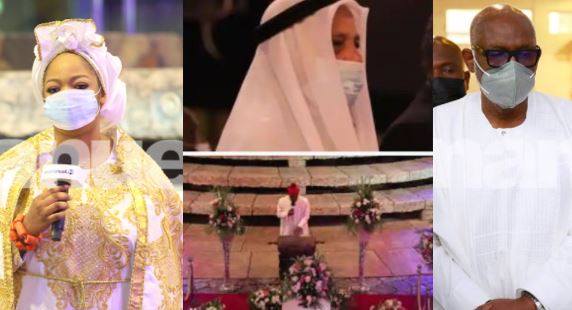 Followers of late TB Joshua still find it hard to swallow the bitter pill even after the highly revered man of God’s lifeless body was displayed in a transparent casket. It was an emotional moment at the final burial service as tributes pour in from all walks of life for the deceased man of God.

Government officials, dignitaries attended the main laying-to-rest service for the founder of the Synagogue Church of All Nations (SCOAN). The interment service of the clergyman who died in June is being held at SCOAN in Ikotun area of Lagos state on Friday, July 9.

Photos shared by SCOAN Ministries on Facebook and sighted by TheinfoNG, show the cross-section of those in attendance at the short service for the late T.B Joshua before he was buried. Notable faces of politicians, religious leaders, captains of industry, to name a few were on the guestlist for the interment.

Tee mac, Byron Cage, and Shirley Murdock were the sensational gospel acts who gave beautiful musical renditions during the ceremony

1. The governor of Ondo state, His Excellency Rotimi Akeredolu

3. Olori Naomi Adeyeye Ogunwusi, the wife of the Ooni of Ife

7. Bishop Trevor Williamson from The Bahamas

9. Ayoob Kara, president of the Economic Centre for Peace, Israel