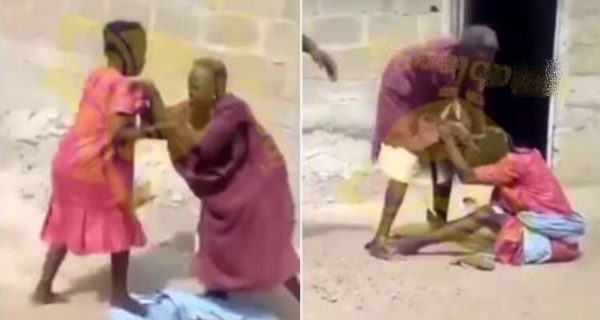 The video of two elderly women fighting over a man is now circulating on the internet.

An eyewitness said the taller woman, dressed in an oxblood gown, had discovered the other grandmother chilling with her boyfriend, Baba Ibeji. She then went to her rival’s house to tell her to keep away from her man.

Unfortunately, the visit devolved into a verbal spat and then a violent physical altercation, necessitating the involvement of others. Individual attempts to split the duo off failed completely as they continued to show off their physical prowess.

What happened after I caught my boyfriend in bed with…

In other news; Following rumors of his amorous relationship with dancer Korra Obidi, recording mogul Don Jazzy has reportedly filed a lawsuit.

Cutie juls, an IG gossip blog, reported this via a post on their backup page, noting that while Korra Obidi complained their Instagram page, which resulted in it being taken down, Don Jazzy has gone legal to prevent rumors about his purported escapades with Korra from spreading.

Lady accused of having an affair with Rihanna’s boyfriend, ASAP Rocky, finally speaks