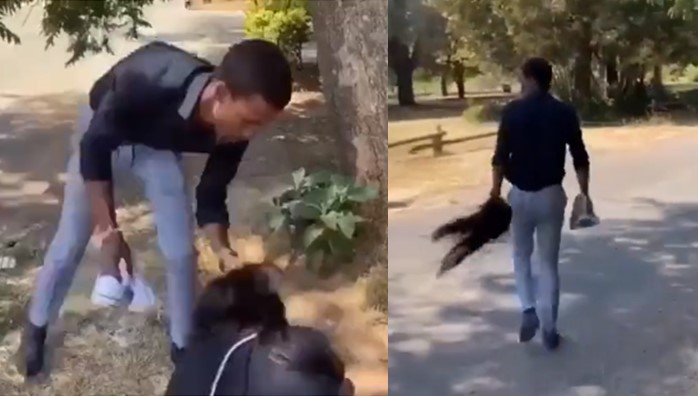 A young man has been left with a broken heart after he discovered that his girlfriend cheats on him with different men.

A source close to the couple said the lady had been cheating on her boyfriend for eight years but he only just found out.

In a video that has gone viral online, he could be seen forcibly taking back the wig and sneakers he bought for her.

It was captured in a public place and someone was trying to advise him against getting physical or collecting the items but he refused to listen.

The source also said that she nearly gave him infection because all the times she cheated, she never used protection.

Watch video of him collecting the gifts:

Is this playing? What kind of playing is this?

@GeorgyMilly1; Don’t do that to a woman publicly… If you break up with her… Don’t collect the stuffs back… Gave my ex stuffs, I no collect am back oh, and so many other stuffs… When you leave a woman leave every other thing including the stuffs you bought for her…

@Nsixemagination; Embarrassing her outside.. welp I won’t do that but will definitely collect my things I put so much passion to get for her but privately. If I ask and she says no… 😂 olopa ma ko anybody.

@niphijosh; Very serious play. They both had their phones checked and the lady’s case was worse. She sells her body on the app and d BF doesn’t know. He was basically collecting his little investment back.

@mezie_vick; I support the guy. Anything u buy for these girls make sure u collect dem back. So dat in ur next relationship u wont have to b buying new things again.