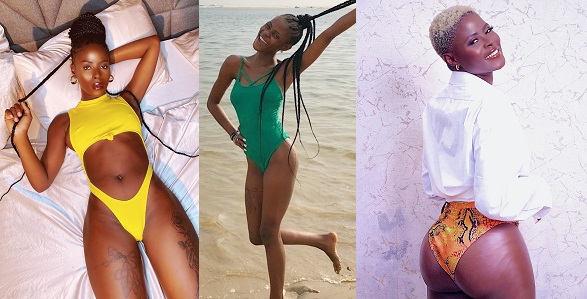 The Instagram sensation opened up that she had a butt implant done after rumors of her working on her body.

The former BBNaija housemate got Nigerians curious when she shared a video of her enlarged butt a few days ago and many wondered how she was able to achieve that overnight.

Khloe who initially denied the allegation claimed she added some weight by using weight gain syrup and constantly drinking pap, but she has now openly declared on her Instagram page that she had surgery done to her backside.

Taking to her Instagram page Khloe shared a sexy photo of herself with her massive backside on display and then wrote,

“Kidbro with the lens @opher_shots ( sorry I posted the unedited one, since I’m plastc, my pics should be straight out of camroll)🤣💕💕”. She added.

Recall that the ex-BBNaija housemate was recently exposed by an Instagram blogger who shared a picture of her while she was unconscious on a surgery bed during her butt implant.

According to the blog, Khloe’s new large butt is not as a result of any herbal product but cosmetic surgery.

Now, the black beauty has owned up to all the allegations and she is no longer in denial.

“Erica is a useless HOH without Kiddwaya” – says Vee

“I went to BBNaija to promote my brand but luckily, God blessed me with something better – Ka3na (Photo)