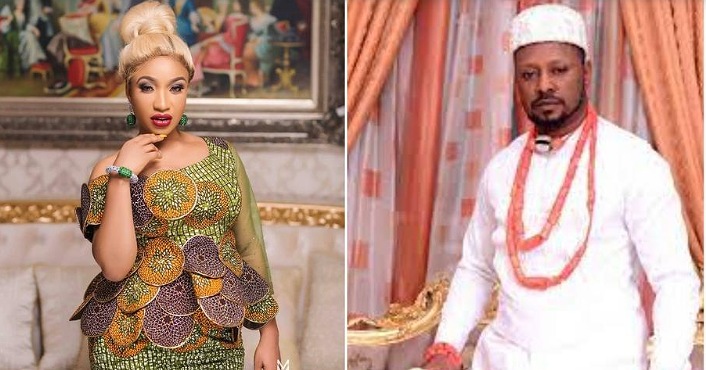 Controversial Nollywood actress, Tonto Dikeh, has bashed a critic who requested that she returns the vehicle Prince Kpokpogri bought for her.

Tonto slammed the critic on Instagram after the troll called her out over the alleged arrest of Kpokpogri.

The critic had noted that Tonto should make sure she returns the Lexus SUV Kpokpogri allegedly demanded she returned, following his arrest by the Nigerian Police Force.

According to the troll in local parlance, “But make she just return the car.”

In retaliation, the movie star pleaded with God not to punish the critic for spewing bile, noting that prince hasn’t returned the Hilux she bought for him, amongst other luxurious items.

She stated that Prince deserves to face the full wrath of the law over allegations of blackmail and extortion.

In the lengthy post, where she replied the troll, Tonto ranted:

“Let God not punish you for this nonsense. Has he returned my brand new Hilux I bought for him? My Diamondssss I got from @bozdiamondsss for him…. Shouldn’t he answer to blackmailing me with my sex tape illegally recorded or the release of a vulnerable moment illegally recorded and released??? In my opinion, he deserves NO mercy, let the law prevail… If I’m the law he will rout in jail but I’m not.

“He needs to answer for putting a GUN to my head (attempted murder). Threatening my life and the possession of

“A 2017 refurbished Lexus isn’t the/My issue. I drive a Bentley, I have a Maybach on the way, I have a gwagon, I have a Lexus car and a Mercedes van.”

It would be recalled that a report surfaced online, alleging that Tonto got the Deputy Inspector General of Police (DIG), Joseph Egbunike to arrest the prince.

The report claimed that Tonto is allegedly using her relationship with the DIG of police to teach her ex-boyfriend a lesson for messing with her.

According to the report:

“DIG Egbunike has ordered the arrest and detention of Prince Kpokpogri who is asking Tonto Dikeh to return his Lexus SUV after both lovers parted ways. Tonto is allegedly using her relationship with the Police DIG to “teach Kpokpogri a lesson” for messing with her.”