“Ikenna why are you crying?” – Bride questions her lover as he breaks down in tears while taking marital vows (Video) 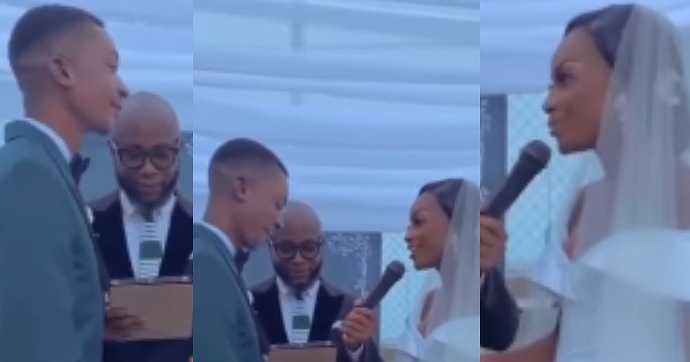 A video making the rounds on social media shows the moment a groom broke down in tears during his wedding ceremony.

Reports gathered that the couple were finally joining together in holy matrimony after years of being together with each other and dating.

During the wedding, while taking marital vows, the groom burst into tears and the bride was stunned by his action as she apparently didn’t expect such to happen.

“If you are concerned about anyone looking…

“Forced marriage” – Reactions as bride refuses to kiss her…

In the video making the rounds on social media, the groom was seen shedding tears of joy, as his wife vowed to be with him through thick and thin.

After she noticed that her husband to be was shedding tears, the bride asked why he was crying, and then she burst into laughter.

“We’re back to reality” – Regina Daniels shares beautiful photos with her family, as she finally lands in Nigeria