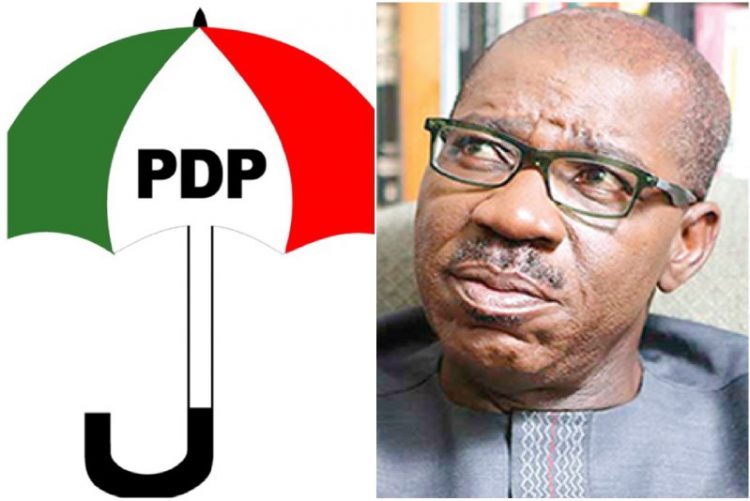 Recall that the Edo state governor, Godwin Obaseki was disqualified by the APC committee panel on Friday and this has led to speculations that the Governor could move to the opposition party, the PDP.

Well, the Peoples Democratic Party (PDP) has said that the party will readily admit the embattled Edo State Governor into its fold if the governor decides to join the main opposition party.

The National Publicity Secretary of the PDP, Mr Kola Ologbondiyan, disclosed this in a telephone chat on Friday, TheNation reports.

Asked if the PDP was ready to admit the governor into its fold, Ologbondiyan said: “Yes, we will accept him, of course.”

The party spokesman however, said Governor Obaseki had yet to approach the PDP for membership as of the time he spoke with our correspondent at 6.57 pm.

Asked if the PDP would offer its Edo State governorship ticket to Obaseki if he joined the party, Ologbondiyan said the governor won’t get automatic ticket if he joined.

“Joining a party is different from contesting election. These are two separate things. People join political parties from their wards. We are in touch with our Edo State chapter and they have not told us that the governor had joined our party,” Ologbondiyan said.

Three aspirants seeking the PDP ticket for the Edo election had already been screened, signaling the close of nominations.

Reports making the rounds on Friday indicated that the PDP had envisaged Obaseki’s eventual defection from the All Progressives Congress (APC) and that the opposition party had prepared ahead for him.

A party source hinted that the eventual winner of the PDP ticket might be persuaded to withdraw from the race for Obaseki on agreed terms.

The leadership of the PDP has always maintained that it would not hesitate to grant waivers to new entrants to contest elections, even on the day they joined the party.

Governor Obaseki was yesterday disqualified from seeking re-election on the platform of the APC as he was screened out by the party’s screening committee.

The governor has said that he would not contest the decision.

Mercy Eke shades the hell out of Tacha on IG Live, brings back body odour diss